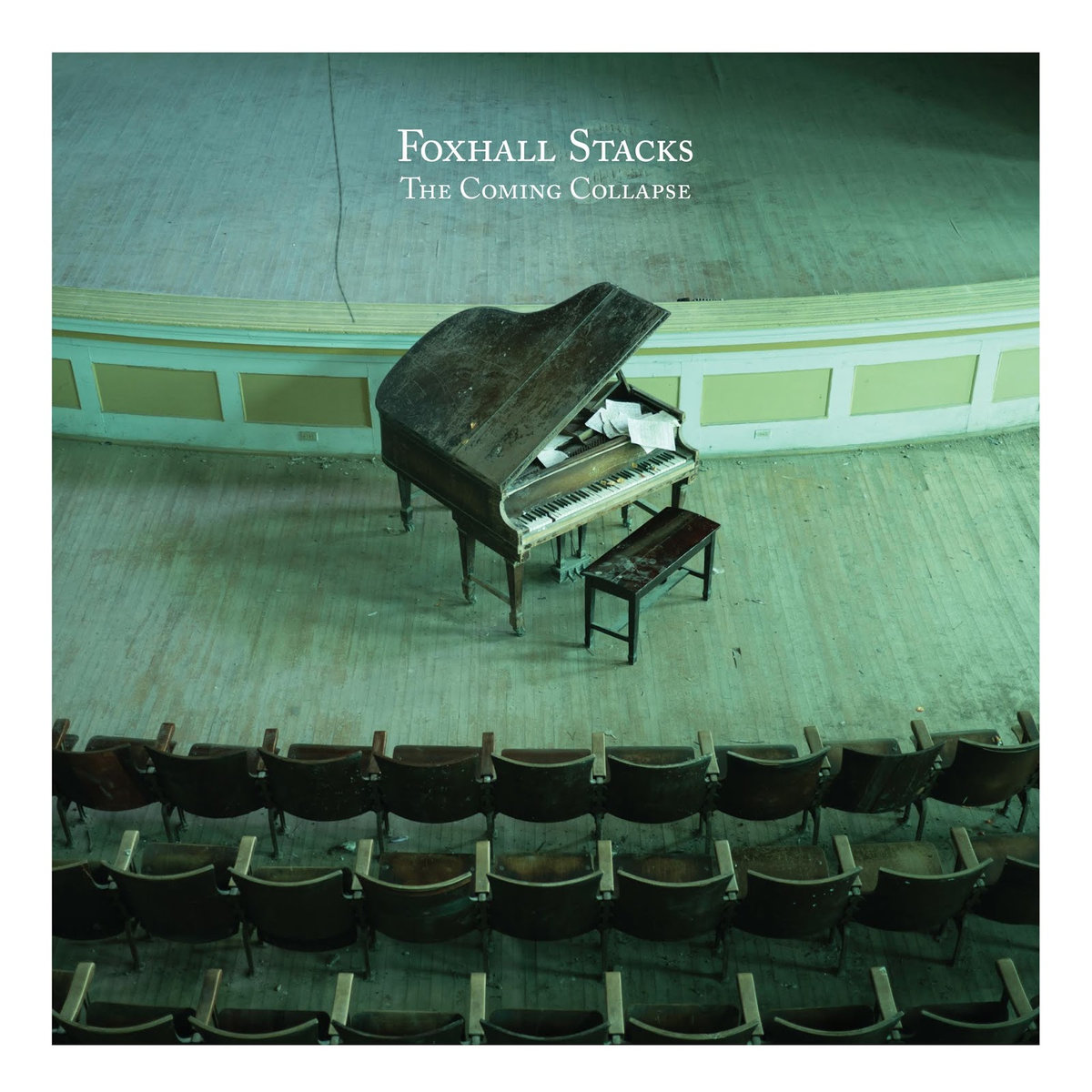 Despite being a perennial punching bag in some corners of music journalism, power pop lives on. The earliest power pop bands took British Invasion melodic sensibilities and turned it up, pairing big hooks with self-deprecating longing. Each successive generation of power pop musicians added a new wrinkle or two while simultaneously worshiping at the Altar of Power Pop Past. At this point, power pop, as a form of pop rock, is an earworm ouroboros. Power pop fans (and I am among that number) are fine with this; we just want the hooks to keep coming. Keep ’em coming. Please.

The Coming Collapse, Foxhall Stacks’s first full-length release, is breezy enough and certainly catchy enough to pass muster for most power pop devotees. All of the right elements are here: the overdriven choruses are catchy (“Turntable Exiles,” “Rough Sailors”); the swarm of handclaps and punchy harmony vocals ever-present (“Do It Yesterday”); the acoustic tune is here (“Worried”); so is the punk-ish number (“The Old Me”); oh, and there’s the quasi-psychadelic song (“Failure”); and so on. The Coming Collapse follows the standard power pop template nicely, specifically the late-’80s/early-’90s alternative rock wave (think the Posies, Material Issue, and so on). but the band’s genesis is a little more surprising than the usual mopey-Anglophile-English-major-with-guitar origin story. The band’s members all have impressive resumes, especially in the indelible Washington D.C. hardcore punk and post-hardcore scene. (Between the four: Minor Threat, Government Issue, Wool, Jawbox, Burning Airlines, Bad Religion, Dag Nasty, Velocity Girl, and High Back Chairs, just to name a few.) But a bunch of aging (gracefully!) punks playing catchy guitar pop isn’t that odd, in the grand scheme of things—there’s a lot of overlap with the “punk” and “power pop” Venn diagram sets, when you get down to it.

The thing that breaks the mold here is that The Coming Collapse unrepentantly deals with the ravages of age, both individually and as a society, more than almost any other power pop record I can think of. That sounds more highfalutin than it actually is—the lyrics are often a weak point of the album, with a number of clunky rhyme pairings littering the tunes. The band isn’t trying to pretend they’re decades younger than they are, though, a problem with some legacy power pop acts. Instead, frontman Bill Barbot lets the existential dread seep into the grooves of the record—when you’re worrying about the fabric of your society unraveling, who has time to fret over whether that cute person at the amusement park notices you or not?

While the album leans heavily into songs that skirt around mid-tempo, the rhythm section keeps things moving. Pete Moffett has always been a pocket monster on the kit (see his outstanding with J. Robbins’s post-Jawbox outfit, Burning Airlines, for an example), and that doesn’t change here; he and bassist Brian Baker lock into a groove from the opening lines of “The Reckoning” and maintain it for the next 40 minutes. Jim Spellman’s lead guitar lines provide a nice counterpoint to Barbot’s occasionally angular rhythm guitar parts; while the two don’t have the instrumental chemistry that Barbot had with J. Robbins on the later Jawbox releases, there’s a comfortable vibe on the songs on The Coming Collapse. These are four scene veterans having fun together, and it shows.

Saying The Coming Collapse is “solid” could be interpreted as a backhanded compliment. It’s not. The Coming Collapse is a well-made, tuneful album with little in the way of filler. This last point alone makes it a power pop rarity. But, aside from a handful of excellent songs (“Turntable Exiles,” “Law of Averages,” and “Top of the Pops” really are fantastic tunes), the album is, well, solid. And it doesn’t really need to be anything more, really. Sometimes, singing along to something that’s good enough with your fellow travelers as the world collapses is enough.

The Coming Collapse is out now on Snappy Little Fingers Quality Audio Recordings.