Weezer’s latest offering sees them trading the guitar for the viola, with surprisingly effective results. 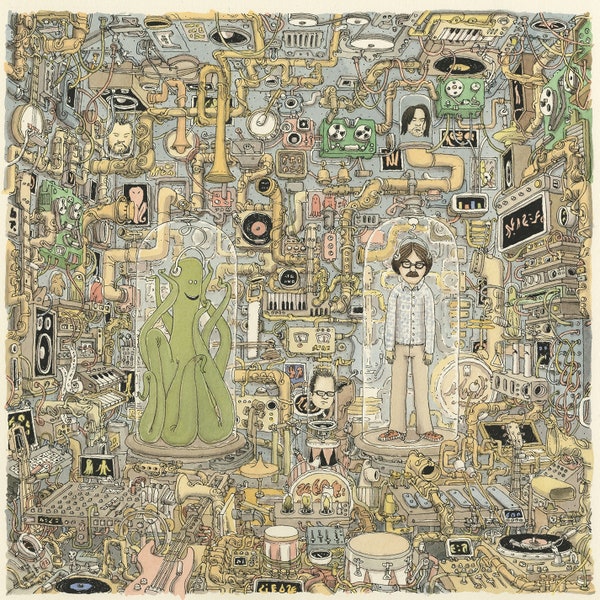 Poor Weezer can’t seem to get a break. Head honcho Rivers Cuomo has an irrepressible desire to pump out material, and it seems like its reception is always at the mercy of the guitar music faithful.

As for me, I’ve been waiting for Weezer to really get experimentation right. Perhaps I’m in the minority, but I’ve always been willing to give them that chance. As much as I do love massive crunchy guitars and wailing solos accompanying lyrics about D&D and rejected concert invitations, one of the greatest charms of Weezer truly has been Cuomo’s penchant for writing a sweet pop melody. When he gets lazy with it, it’s often to his craft’s detriment, even with those big guitars (see “Beverly Hills”). Some of their strongest recent work has deviated from that guitar-alt formula, specifically on their stronger cuts off of 2017’s Pacific Daydream, which saw middling reception but nonetheless soared in its best moments (listen to “Sweet Mary,” “Weekend Woman,” and “QB Blitz” before you contest that point). We have to remember that Weezer has always been a pop-band, and Cuomo a pop music scholar and advocate of sorts. Even those first two albums that are constantly exalted at the expense of their later work were released when loud guitars and outsider angst were “The Thing”. Cuomo’s talent as a composer of melody could be met with a little more open-mindedness. Unfortunately, especially in their rockiest period (2005-2010), deviation from their classic sound has been handled quite clumsily by Cuomo and crew. Which is why I was just a little skeptical when OK Human dropped basically out of nowhere.

The opening track and lead single, “All My Favorite Songs,” quelled some of that skepticism. Immediately engaging and infectious, the song served as a satisfying sample of how Cuomo’s songcraft could lend itself to a 38-piece orchestra. The album was not quite a surprise; Cuomo had teased its existence long before its announcement. What was surprising was the choice to keep what was thought to be a working title (despite being a somewhat asinine album title, it’s kitschiness is nonetheless very Weezer, so to say). How was a 38-piece orchestra going to sound, though? Well, given Cuomo’s affection for orchestral experimenters like The Beatles and The Beach Boys, potentially quite solid. “All My Favorite Songs” almost immediately confirms that. “All my favorite songs are slow and sad,” Cuomo sings over a viola and cello accompaniment. “All my favorite people make me mad…I don’t know what’s wrong with me.” This is when the full ensemble takes effect, gelling impeccably well with bassist Scott Shriner and drummer Patrick Wilson’s rhythm section (probably the most consistently great thing about their recent output). The lyrics are simple…rudimentary, even…yet seem to hit on some universally relatable feelings, even if a little more detail and originality might be desired. Either way, the single shines…but then again, so did “(If You’re Wondering If I Want You To) I Want You To.” It’s all downhill from here, right?

Enter “Aloo Gobi,” which opens with a burst of staccato cellos that may have been a palm muted distorted guitar in the hands of a coward. Cuomo builds on the feelings of confusion and isolation that the opener and many songs before it have touched on, adjusted to the thoughts of a 50 year old man. “Oh my god, what’s happening to me? Walking down Montana, WOAH-OH-OH” he sings in an impossible-to-shake Wilson-style melody. “Same old dull routine, same aloo gobi…” The aversion to mundanity, however, is short-lived, as he is waxing poetic about audiobooks on the very next track. Cuomo rattles off many literary references (and yes, a little bit of product placement) that will make those of us who loved English class smile, in a tune that will make those of us who were also theatre kids bop our heads. Watch it appear on Audible’s next ad.

Things slow down a little bit with “Numbers.” This is where the album seems to reach its apex for me (thankfully, it starts in a high place as is). In the closest thing to the title’s Radiohead reference this side of “Screens,” Cuomo laments over the reduction of humanity into numbers, be it statistics or Instagram likes. Shriner’s playing shares the spotlight with Cuomo, following the McCartney school of melodic bass, and the vocal harmonies of the four members, all very able singers, shine in a rather meticulous bridge. It’s all in service of the kind of mighty chorus that one could always hope for in a Weezer track.

“Playing My Piano” feels like a sort of sequel to 1994’s “In The Garage,” with the single 23-year-old in an alternative rock band now middle-aged, married and raising a family, only to continue to escape to his “stupid songs…” only it’s a baby grand he’s jamming on this time. Fragmented into two separate verse melodies…one that sounds like a Disney tune, the other sounding oddly close to the second movement in “Heroes And Villains”…both supported by a sweeping chorus. Bleeding into the lovely, hymn-like interlude “Mirror Image,” which almost evokes a bride marching down the wedding aisle, Cuomo finds his most poignant lyricism in the whole album in a simple, twice repeated quatrain. “Screens,” while never quite as deep as it might want to be, sees the darker side to the mundanity that has invaded our lives in quarantine, while “Bird With A Broken Wing” and “Here Comes The Rain” look to serve as songs of hope in a time when bleakness and despair has become our mundanity. Continuing a tradition that has become quite routine for mid-career Weezer, they close the album with a reference to their home city of Los Angeles, “La Brea Tar Pits,” one of the album’s bounciest numbers, and the one that veers the closest to quasi-psychedelia with its disjointed breaks and prominent splashes of electric keyboard. While there could have been more done with this reference as far as extended metaphor goes, it adapts Cuomo’s affection for his adopted home city to the album’s themes quite admirably.

Overall, after the unfocused mess that was the band’s 2019 self-titled offering, OK Human is quite welcome in that it is Weezer’s most focused and consistent album since 2016’s excellent eponymous effort (“the White album”), which saw them balancing a long awaited “return to form” with more overt nods to Cuomo’s affection for sunshine pop. But perhaps this hallowed “form” has always just been the capability to crank out an unfaltering collection of fine pop melodies, no matter the arrangement (for those longing for guitar heroics, the upcoming Van Weezer should whet your appetites, and given the recent singles you have every right to be excited for it). On that front, OK Human never misses. When it settles into its baroque pop sound, it never strays far from it, and thus, aside from this sound being different from anything they’ve done prior, surprises do not abound. However, the songs will stick in your head, in the most pleasing way they could. And when it comes to Weezer, and not to mention these confusing and sometimes overwhelmingly bleak times, well, what more could you really ask for?

The new Greg Dulli solo album is the creative culmination of a 30-plus year career.

Random Desire is billed as Greg Dulli’s first solo project. Even if you ignore the fact that Dulli already had a solo debut in 2005 (possibly a technically , since it was released as quote Greg Dulli’s Amber Headlights end quote), Dulli’s bands—the Afghan Whigs, the Gutter Twins, and the Twilight Singers—were always driven by his singular creative vision. His bandmates played important roles, but they were always in service to whatever muse Dulli was following at the time. If Dulli is fronting a band, it’s going to sound like his project, period.

After “reuniting”* the Afghan Whigs in 2011 and releasing two albums (2014’s good Do to the Beast and 2017’s excellent In Spades), Dulli found himself in need of a creative outlet as the band again went on hiatus.  Random Desire is that outlet; inspired by Prince, Todd Rundgren, and other one-man-bands, Dulli wrote, played, and recorded the whole album himself (save for some guest spots from his pals). While there’s a slapdash quality here as a result, the album is still the most diverse release in Dulli’s career, revisiting almost every creative detour he’s taken while venturing down the occasional new path.

One of the most fascinating things about Dulli’s creative output over the years is that as his songwriting accumulated new wrinkles, he’d take those elements to his next project and continue building. So while the Whigs started off as a loud college rock bar band with serious ’60s R&B/soul undertones, they kept expending, ladling in more and more nuances. And then the Twilight Singers added a dollop of electronica and sunny indie rock. And the Gutter Twins folded in some late ’80s Nick Cave vibes. Random Desire keeps with this trend, as all of these elements swirl and slosh around. Some songs, like the glorious “The Tide,” revisit touchstone points (in this case, Black Love-era Afghan Whigs, with a huge upswell of guitars, piano, and Dulli’s howl). Other tunes try some new tricks, like opener “Pantomima”—it’s maybe the single most joyous-sounding thing Dulli has released. And “Scorpio” slinks along with a sexy vibe that’s carried by a trip-hop backbeat and some impressively syncopated verse vocals from Dulli.

If Random Desire suffers, it’s mainly from the limitations of keeping this to a one-man affair. I’ve always found Dulli an underappreciated musician, a true jack of all trades whose musicianship was always eclipsed by his huge on-stage persona. But while a more-than-capable multi-instrumentalist, Dulli’s playing never strays far from what he’s done before. The same can’t be said for his vocal performance—Dulli’s raspy yowl aims for some sultry low notes that are far out of his range. It’s endearing, but still a bad fit for the album. And it’s also not helped by the thin-sounding production; Dulli might’ve been shooting for this early Prince aesthetic, but it doesn’t mesh well with the anthemic swells that frequent his songs.

Random Desire is also the most lyrically diverse of Dulli’s career. Dulli’s songs have always been about the brooding and self-destruction that comes with passion. But here, he seems to take a step back and look at the sadness, joy, and peace that comes from relationships (or, like in the album’s standout “Marry Me,” broken relationships). It’s still Dulli, but this is the most mature he’s ever sounded (or, his persona has sounded, if there’s any actual difference between the two).

Clocking in at a mere 37 minutes, Random Desire covers a lot of ground in a little time. Even with its limitations, the it’s the most true sounding recording Greg Dulli has ever released. Maybe that’s why it’s being billed as his first solo album.

Random Desire is out now on Royal Cream/BMG.