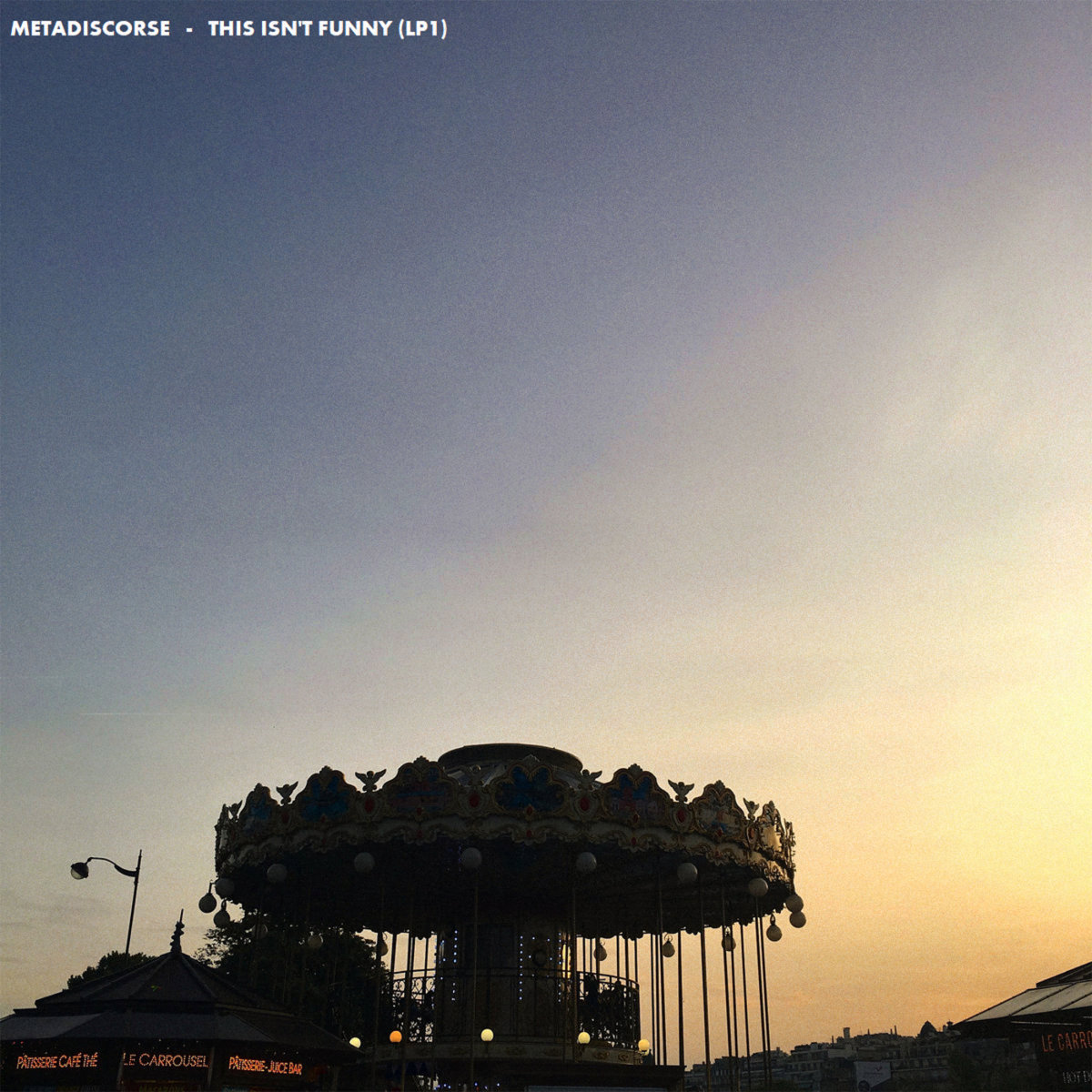 I’ve been called an old soul for preferring albums over singles and EPs; indeed, it is far more common to see bands releasing shorter (and more regular) works to appeal to dwindling attention spans and the saturation of dopamine that is omnipresent. That’s not to say singles or EPs are lazy, but they’re certainly more convenient from a commercial standpoint. Albums largely seem to be on their way out.

Enter Metadiscorse who have crafted a two-disk long player behemoth of a debut. The first part, This Isn’t Funny, is officially out today (along with some bonus live tracks), and the band has not cut any corners here. Six of the eleven tracks are over four minutes long, with several tracks approaching the six-minute mark. Even the conscious decision to go beyond nine or ten tracks seems significant. And while LP2 is still forthcoming, if we assume it’ll be comparable in length, this ends up being quite a hefty project.

Sonically, the band describes themselves as lofi and bedroom pop – neither of these is inaccurate, but I’d also add in terms like beach rock, grunge, and vintage psych. It’s full of moments both viscerally joyful and passionately vulnerable as frontman Hunter LoBianco croons over a variety of compositions that transport listeners from quiet docksides to restful country hamlets.

It’s hard not to draw comparisons to fellow Wisconsinite band Horace Greene, with their own unique flavor of retrospective rock. Metadiscorse has enough unique DNA in the form of more unique song structures, wide stylistic influences, and overall dynamics. However, vocal style and guitar tone are probably the biggest shared element between the two bands, and it’s hard to mentally separate the two.

“American Troglodyte” arguably serves as the flagship track on this LP and serves as a prime example of what LoBianco and friends are capable of. It’s the longest track, but none of that time is wasted. A waltz-like piano base and auxiliary percussion open the track, but the end is a whirling crescendo of full-band instrumentation. While the album has several instrumental (or at least nearly-instrumental) tracks, this build easily stands out among its compatriots.

One downside to the album format that many critics are justified about is the ability to be cohesive; personally I’m drawn to concept albums which play off motifs, lyrical themes, and elements of self-reference. Can you write a good album without these? Yes. But there’s a tendency for some albums to feel like a collection of singles more than anything else. And when a band like Metadiscorse sets out to release an album of such proportions, it’s hard for things to not feel consistent at times. The narrative inevitably suffers a bit. And genuinely, even some of the most ambitious (and greatest) albums begin to drag a bit as they surpass an hour runtime.

There are plenty of solid moments on This Isn’t Funny, but cutting a track or two could help it feel more solid as a whole. “Self Esteem” is a grungy interlude track that feels out of place on the album to begin with, but its slot as the second-to-last track seems to disrupt what would have been the one-two punch of “American Troglodyte” and “Out to Get Me”. “Problematic” and “Mid-Air Collision” are both stripped back type tracks, but even they feel too lofi for an album marketed as such. Juxtaposed against “Open Letter to Ms. Caroline”, these songs feel perhaps a bit under-developed.

But apart from these songs, there’s not too much to complain about. Sure, production could be a bit more pristine but there wasn’t a $20,000 budget here. The band has been fairly resourceful and the end result still sounds pretty crisp. The variety of explored genres is exciting, especially the mathy “Tokyo Drift (Conventionally Unattractive”. The variety may feel like a bit of a musical identity crisis at times, but there’s huge potential for the band to market specific songs to different audiences and leverage themed playlists here.

Metadiscorse is fearlessly-ambitious on this release, and they’re not afraid of the short-term commercial impact. This Isn’t Funny is ultimately a chill album that feels cozy in the quiet of your home but would nonetheless have allure live as well. It may not feel completely well-rounded, but barring a few earlier complaints, it’s definitely a strong debut album that is certain to help you slow down and appreciate beauty in the simple things in life.

Check it out here or on most digital streaming outlets.