For fans of: AJJ, Pat the Bunny, The Dead South Murder by Death, Dixie Chicks 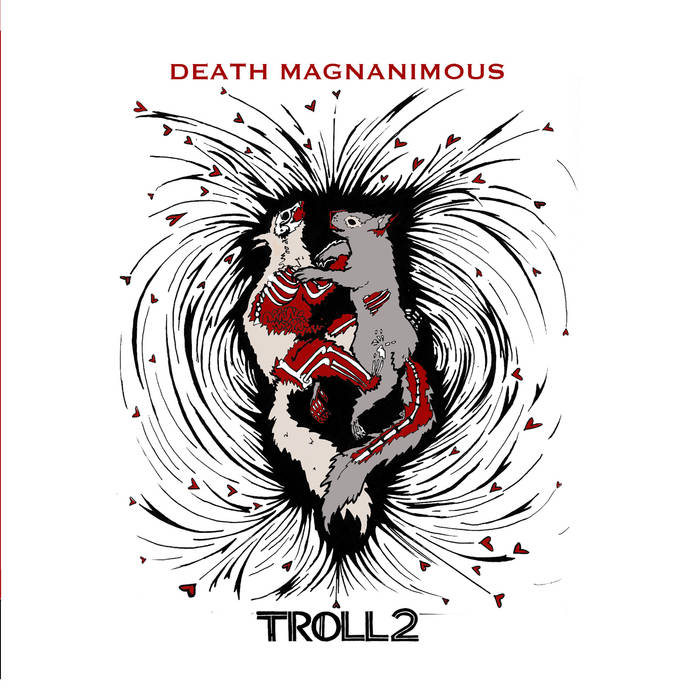 If you’re been around the block for a while, you’ll recognize Troll 2 as that immediately divisive movie released in 1990 with little connection to its predecessor that sits at a 6% rating on Rotten Tomatoes. The film has garnered colorful reviews like the following:

“Troll 2” is as treacherous and repulsive a film as I’ve ever seen. Judging by the actors’ crude performances and the incredible lack of technical skill, it doesn’t seem like anyone involved in the production knew what they were doing or what was going on. The first explanation that comes to mind is that all of the badness is intentional, but even I don’t think that a purposely awful film would come close to the ineptitude shown on display here. It’s ugly, poorly-strung together, not scary in the least bit and altogether a real horrible thing. The only half-redeeming quality about it is that its own awfulness may cause you to laugh, but don’t count on it.

Thankfully, this is not a review of the film – but instead, of a band who has chosen the film as its namesake. Boston-based Troll 2 is socially-conscious folk-punk group formed in the 2010s from a host of other bands. The band carries a similar wit to The Dead South (if the name weren’t proof), tackling issues like the wage gap and police abuse with energetic, direct songs. There’s even a touch of macabre mixed in as well, in true AJJ fashion.

Death Magnanimous, the band’s 2018 LP, certainly holds nothing back in any of these respects. After the instrumental interlude “Theme From Troll 2”, the band dives into the murder ballad, “Means and Motive”. Stylistically, it has a bit of Carrie Underwood-esque vocals mixed into the aggression of the Dixie Chicks’ “Goodbye Earl”. Here’s a check look at some of the lyrics:

She came to me, calling after midnight
Sobbing in the bathtub with still her sweater done
As I watched the water run from salmon into scarlet
I knew right then and there we would not stop ’til this war’s won

We packed the car and we headed down to Danvers
I at the wheel, her small frame shotgun side
I’ll erase evidence like you erase accusations
Why is justice for others so often self denied?

The song addresses domestic abuse and manipulation of power with bold lyrics and enchanting instrumentals. Strings aplenty adorn the album, but it never feels needlessly southern. The musical compositions are worthy to accompany their lyrical counterparts, showcasing the same levels of wistfulness and aggression.

“I’ve Got a Stick” is a playful anti-violence song whose highlight line is “Kiss your mom / I’ve got the bomb”. There’s a silver lining on the ending verse (which is an alternate take on the first), which focuses on the power of cooperation.

Other tracks, specifically “Roadkill” and “You Should Think About Death More” focus more on mortality, ephemera, and perhaps even depression. However, these are not cheap sentiments; rather, they’re meant to be viewed in light of the other themes on the album. The underlying commentary is a call to action rather than a simple regurgitation of how depressing modern life is. “There’s no end until you face it”, the album concludes. It’s easy to read that as acceptance of mortality but it’s also an implication that the problems that permeate society will persist if we simply ignore them.

“Theme from Troll 2 – Reprise” perhaps sheds a bit more light on the album and band as a whole. It’s a counterpart to the opener, but it contains lines from the Troll 2 film. Specifically, the lines concern the infection which is a main plot point of the movie. As characters contract the illness, they are in stasis, simply waiting to be devoured. It’s not hard to see a confused, burdened, and largely-passive public in the same way. The infection is already here, and we’re called to be on guard.

Death Magnanimous is an example of how folk-punk should be: culturally-sensitive, masterfully-crafted, clothed in timelessness. If it were an instrumental album, it’d be easy to mistake it as baroque. If it were judged on lyrics alone, you might expect a large influence of swamprock and country. But it instead rests in the confluence of artisan string melodies, upbeat folk, and lyrics that never shy from tough issues. Troll 2 stand out from their compatriots with their ability to balance all of these elements without sacrificing any relative portion of a single aspect. And while it’s unfortunately too late to add Death Magnanimous to your end-of-year favorites, this is certainly a band you’ll want to keep an eye on.